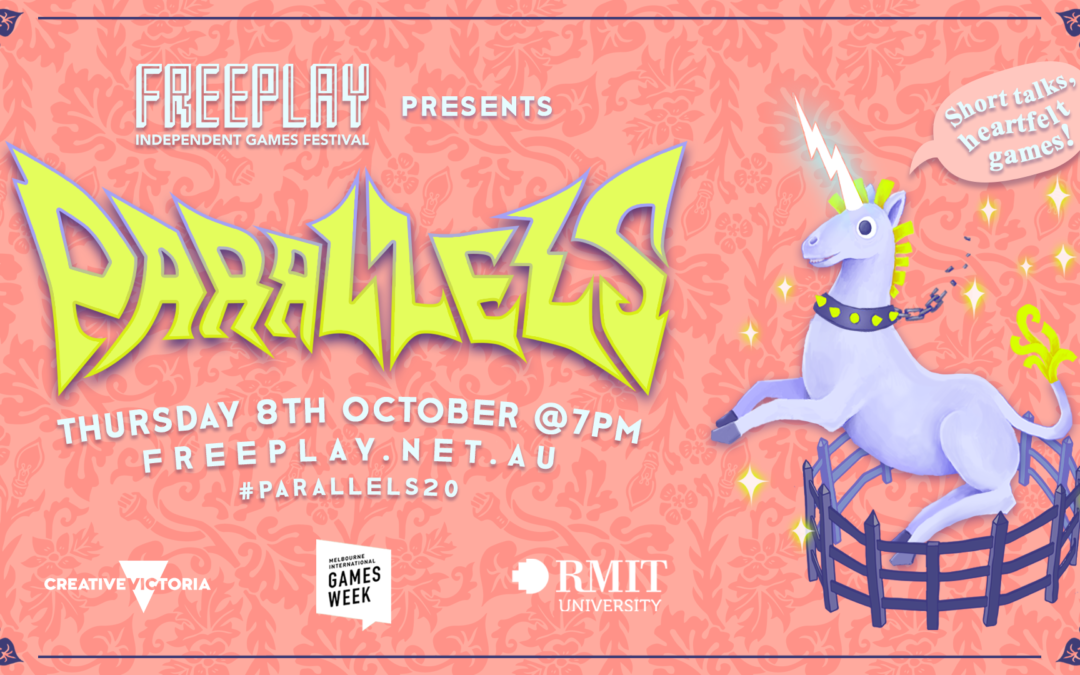 Our wonderful team has been hard at work, and we’re thrilled to announce that Freeplay’s Parallels will be returning in 2020 as a free live-streamed event!

Join us at 7PM on Thursday, October 8th 2020, during Melbourne International Games Week (MIGW) as our speakers play and talk about their creations, share their origin stories, creative inspirations, and intimate journeys.

We’re very excited to have 9 amazing games by 9 amazing speakers this year, and will be announcing our full lineup soon. Watch this space!

You can support Freeplay and Parallels by opting in to purchase a support pass via the button below. Your contributions go directly towards paying our speakers and staff 💖

Parallels is a one-night-only curated showcase of some of the most experimental, personal, and culturally significant work being made in and around Australia’s independent games communities today. From the artsy, to the weird, to the provocative and punk. The event is hailed as one of the biggest highlights of MIGW by local and international attendees.

Parallels provides a unique platform for emerging and established Australian independent game makers to talk live on stage about the art and craft, and the heart and soul of their projects. This is the very essence of Parallels. Short talks, heartfelt games. This provides an intimate and invaluable window into the behind the scenes of these games and allows the game makers to share their personal stories of challenge, frustration, and success; stories that would otherwise go unheard, unspoken, or unnoticed.

Parallels 2020 will be hosted online, streamed live to YouTube, and free for all attendees to view. Complimentary to the online event will be the Freeplay ZONE, an online social space where attendees can engage and interact with one another, watch the live stream, and play curated videogames by Australian game makers that are exhibited within the space.

The Freeplay ZONE is returning.

Parallels 2020 will feature the Freeplay ZONE, a complimentary online social space created by Jae Stuart & Cecile Ricahrd, originally commissioned for Freeplay’s festival in June 2020. In the Freeplay ZONE, attendees are able to interact with others in a social text-based chat environment, move around the virtual venue using a customisable pixel-art avatar, watch the live-stream in a dedicated theatre room, and play browser-based games that are curated and exhibited within the space. The ZONE is accessed via a web browser, no additional downloads or extensions are required, and is not paywalled. For 2020’s Parallels, with RMIT’s blessing, we’ll be recreating a pixel-art version of The Capitol, allowing attendees to view the live stream from within the ZONE. Attendees will be able to chat, mingle, and play games before and after the event.

“Virtual communication isn’t just a solution to our current physical isolation; it’s a long cherished form of connection! Parallels (and MIGW generally) often bring unique moments of solace, and ‘The Unicorn in Captivity’ resonated to such a feeling during Melbourne’s lockdown. You can see our Unicorn leaping out (finding solace) energised by their lightning-bolt horn (through virtual connection)! The vaguely soft-punk vibes intend to resonate with the pertinent themes and deep feelings that feature in a lot of Melbourne indie games 🌸💜 The original tapestry hangs in The Met Cloisters in NY. Cloisters are historically a place of refuge and spiritual contemplation. I figure we’re in a time where we could find a similar contentment through our telepresence 🤗✨⚡”

Established in 2004, Freeplay has been spotlighting and platforming emerging and marginalised artists, championing Australia’s leading game makers, and exploring the vital margins of independent, alternative, and experimental games. For over 16 years, Freeplay has been encouraging critical, personal, political, and cross-disciplinary dialogue and artistic engagement. Freeplay is committed to fostering an inclusive, positive, and playful culture, and promoting game making as arts-practice and a means of societal, cultural, educational, and economic development.

Freeplay’s Parallels 2020 is proudly supported by Creative Victoria and RMIT.

If you have any questions or enquiries, please reach out: info [at] freeplay.net.au