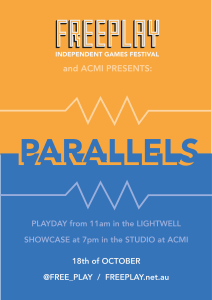 Today we are super excited to announce not one, not two, but three big Freeplay events for both this year and next:

So that’s a lot to announce. But we’re still not done, and we’ll be back with a few more events that we haven’t even told you about yet, too.

We also have some news about the Freeplay organisation itself. Hugh Davies, the Chair of Freeplay’s board, has stepped down after serving in the role ever since the formation of the board. And Gideon Hornung, our Vice Chair, has also stepped down after an equally significant period of service for our organisation. Both have had a huge impact on Freeplay – perhaps more than any one person will ever know – and we thank them deeply for their service.

We’re really excited to say that taking up the roles of Chair and Vice Chair are Trent Kusters (League of Geeks) and Jess Kilby (Pop Up Playground), who we introduced you to earlier in the year. They’ve been amazing so far and we’re sure they’ll both leave a really significant mark on the festival.

Here’s a photo of Trent and Hugh completing the handover. Hugh notes that he’s using the UN-sanctioned double-handshake in this photo, rarely witnessed outside of international press conferences. We think it’s a great photo that illustrates, apart from anything, the amazing warmth and personality that both Trent and Hugh have brought to Freeplay.

More on all of this is to come, soon. We’ll see you at our amazing array of events.